The New Greek: How Saint Francis Changed What it Means to Go Greek

In an era when Greek culture is plagued with controversy and negative news coverage, Saint Francis is reinventing what it means to “Go Greek”, one Franciscan value at a time.

“Everyone says it, you can’t explain it, and you don’t understand it until you experience it yourself. Greek Life at SFU is just different.” - Kayleigh Holzer ‘15 ‘16, Master of Occupational Therapy (Delta Phi Epsilon) 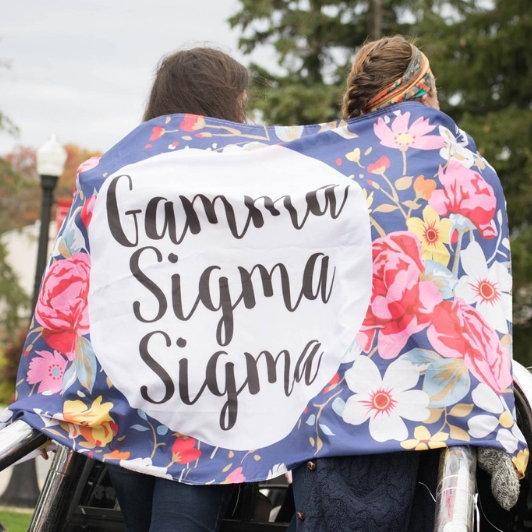 Today, Kayleigh is a pediatric occupational therapist at Fleming Therapy Services in Alexandria, VA. When asked about her successes, both personally and professionally, she credits her involvement in Greek Life at SFU. “I would hands down not be the person I am today if I had not experienced Greek Life so thoroughly,” she said. Kayleigh served as chapter president of Delta Phi Epsilon and president of the inter-sorority council during her tenure at Saint Francis. “In my many Greek roles, I learned effective communication skills, gained confidence in leadership, collaborated and delegated, and worked to creatively solve problems. Most importantly, I learned how to do the right thing, even if it was the unpopular opinion. I learned to trust myself and to do what was right for the good of others. I use every single one of these skills each day as an OT.”

Kayleigh is one of hundreds of students who have been transformed by their experience as a Greek at SFU, who have found their purpose through community service and Greek-related philanthropy, and who, above all, have learned what it truly means to Become That Someone.

It’s no secret that when Greek Life makes national news, it’s rarely good news. For decades, there had been a lack of accountability and justice related to hazing deaths, extreme alcohol and drug use, and sexual violence. Recently, however, there appears to be a societal shift in what is considered acceptable behavior for Greeks. The storied “hard-partying” culture is being rewritten by national organizations like the Northeast Greek Leadership Association, the North-American Interfraternity Conference, the National Panhellenic Conference, and the Association of Fraternity/Sorority Advisors.

These organizations—and a number of others—have defined the new ideals of Greek culture to include service to others, academic achievement, and leadership within their respective organizations, institutions, and communities. Programs that aren’t adhering to these ideals are examined and challenged, and many are forced to shutter chapters. Prospective students and their parents are alarmed by the negative reputation associated with Greek programs, and are factoring that into their college decision process.

In 1948, then Saint Francis College became the first Catholic college in the nation to establish a chapter of a national social fraternity: Delta Sigma Phi. Since then, Greek chapters have proudly bonded thousands of alumni in brother and sisterhood. But as is the case with many storied institutions, an ebb in participation in the ‘90s and early ‘00s reduced the number of chapters to just one fraternity and three sororities. A lack of interest and a mission drift impacted membership, and it seemed as though the blanket stigma associated with Greek Life would lead to the end of a decades-long Saint Francis tradition. It would take an ambitious plan to reinvent SFU’s Greek presence while holding true the community’s spirit that is revered and beloved by alumni.

Mike “Goody” Asselta ‘67 (Alpha Phi Delta) says it’s that spirit that led to lifelong friendships he made as a Greek at Saint Francis. “My Alpha brothers and I still see each other every year at a charity golf outing we organize,” he said. “We’ve also donated campus memorial benches and plaques to honor our brothers who have passed away.”

In 2004, then newly-appointed University President Father Gabriel Zeis ‘75 decided he was up for the challenge. A member of Tau Kappa Epsilon during his undergraduate days at Saint Francis, Fr. Gabe believed Greek Life could be rebuilt while maintaining its positive contribution to the student life experience. The program, he felt, wouldn’t need to be reinvented as much as reminded the values of Saint Francis of Assisi: Humility, Generosity, Reverence, Service, Respect, Prayer, Joy, and Love.

In 2006, then admissions and financial aid counselor Dr. Bobby Anderson ‘02, B.S. in Management Information Systems and ‘06, M.B.A. (Delta Sigma Phi), expressed interest in helping implement Fr. Gabe’s mission to rebuild the Greek program. He moved into the role of Assistant Director of Student Engagement under the leadership of Dom Peruso ‘72, History, and in 2015, to the Director of Student Engagement.

“Dom had already established a new local sorority, Omega Zeta Nu, and had helped to establish interest groups for the revival of Tau Kappa Epsilon, Phi Kappa Theta, and the creation of Psi Upsilon,” Bobby recalled. “I began in the department in the summer of 2006, and over the course of the next seven years, I was able to see the oversee the reemergence of Tau Kappa Epsilon, Phi Kappa Theta, Psi Upsilon, Alpha Phi Delta, Phi Lambda Psi, Theta Phi Alpha, Alpha Phi Omega, and Sigma Chi.”

From 2004-2005 until today, the Greek community at Saint Francis has grown from four chapters to twelve, and from fewer than 100 students to more than 400.

At other universities, the words “hazing” and “pledging” gets tossed around freely. At Saint Francis, those practices have been replaced with extensive staff oversight and an emphasis on personal and academic development.

The New Member Orientation (NMO) program is a comprehensive, 5-week event that works alongside the University to ensure students aren’t compromised academically. Each chapter is required to submit an application to host a NMO program, which includes a lesson plan outlining the content of all that will be discussed, how the program aligns with their organization’s core values, and the intended learning outcomes of each program. Additionally, each active chapter member must submit individual Risk Management Agreements at the same time as their application. If they don’t, or if the application is not approved, the chapter is not permitted to host an NMO program that semester.

Luke Trotz, Assistant Director of Student Engagement and Fraternity and Sorority Advisor, oversees the Orientation program. “The purpose of these processes is to ensure that each member of every organization is aware of our expectations as a department, and as an institution, and to ensure that the content being emphasized throughout New Member Orientation is aligned with each organization’s mission and values,” he said.

Because this process is undoubtedly time-consuming for the student, the NMO offers a mandatory study-table to provide students protected time to focus on their studies, as well as weekly workshops that focus on various topics, such as the history of SFU Greek Life and fraternalism in America, risk management and bystander intervention, community building, and organizational and professional development.

The combination of SFU’s unique Greek approach and the high-caliber of students that enroll at Saint Francis, is what gives our approach an ability to avoid many of the common concerns and significant troubles that seem to plague many other campuses.

The results are in the numbers. “The academics among Greeks here are exceptional,” said Aidan Sweeney ‘20, B.S. Communications (Alpha Phi Delta). “I can proudly say that Greeks in spring of 2018 had a cumulative 3.47 G.P.A. and a 3.38 G.P.A. in the fall.” SFU was twice named the top Greek Life community in the continental Northeast for academic achievement according to Gamma Sigma Alpha National Greek Academic Honor Society. In the spring 2019 semester, Greek G.P.A. was 3.47, a tie with spring 2018 for the highest average in the history of Greek Life at SFU.

An asset to the community

Philanthropy and service are embedded into every Greek mission. Each chapter is affiliated with a charity that it advocates for exclusively. Chapters collectively raise thousands of dollars each semester, and log hundreds of volunteer service hours.

One example of these efforts is the accomplishments of Phi Delta Kappa Sorority in 2019. The chapter donated $5,972.67 to the Make-A-Wish Foundation during the spring 2019 semester, granting them the title of “Wishmakers” for the second year in a row by the Make-A-Wish of Greater Pennsylvania & West Virginia. These funds granted the wish of one special individual named Cole to embark on his dream vacation to a Disneyland Resort.

In total, throughout the 2018-2019 academic year, the sorority has documented over 1,400 hours of service. Michelle Hildebrand ‘20, Nursing, is currently the sorority’s President, and Jennifer Schmith ‘20, Occupational Therapy & Psychology, was the sorority’s Philanthropy Chairperson responsible for leading these philanthropic efforts. For these achievements, Phi Delta Kappa was recognized for Excellence in Service at the 2019 Student Government Association Student Involvement Awards.

Running successful chapters requires strong communication among members, an understanding of fiscal responsibility and budgeting, and the ability to resolve conflict in a professional manner. Students find themselves drawn to positions of leadership within each chapter, and within the Greek program as a whole.

Megan Swisher ‘08, B.S. Marketing (Phi Delta Kappa) was her sorority’s secretary in 2006 and president in 2007. She is now a Supply Chain Manager at Del Monte Foods in Pittsburgh. “Greek Life gave me an introductory taste of what I would experience in the ‘real world’, both personally and professionally. Holding a leadership position, especially president, was like running a small company. It taught me people skills, time management skills, and problem-solving skills.”

Jason Burkett ‘09, B.S. Chemistry (Tau Kappa Epsilon) is an Associate Physician & Assistant Professor in Emergency Medicine at Geisinger Commonwealth School of Medicine. He held leadership positions as Hegemon and chapter educator. “My experiences within our TKE chapter and in the greater Greek community at Saint Francis taught me to develop and nurture lasting relationships, to lead by example, and to care for my community and engage in philanthropic efforts. All of these things played a vital role in shaping my future as a physician. My entire career is now dedicated towards caring for our Geisinger communities and educating the next generations of physicians, nurses, and other allied health professionals.”

President Fr. Malachi Van Tassel T.O.R., honorary member of Psi Upsilion, has expressed his pride in the new Greek program, and is committed to its continued growth. “What the Student Engagement department has done for this program was unfathomable less than 20 years ago. Franciscan values are embedded into our institution’s fiber, and the Greeks have proven that they understand and respect the mission of the University. I can’t wait to see what the future holds.”

Luke has lofty goals for the program. “Ultimately we want to lead our Greeks to moments of self-actualization where they say to themselves: Yes, this is why I am here or This is why I do what I do. Witnessing students in that moment is one of the most rewarding privileges of what we do.”