Capturing the Spirit of the American Virtues of Courage and Sacrifice 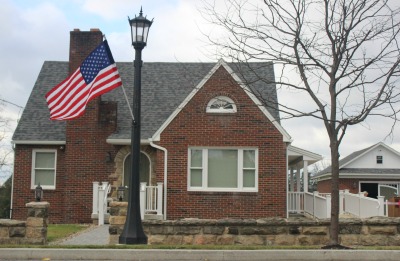 Contributions to the war effort made by men and women of Pennsylvania are featured in the museum’s exhibitions.

An avid preservationist of WWII memorabilia, CSM Keirn used his collection as an educational tool, welcoming students and community groups to tour it and learn about the war.

In 2014, he donated his collection to Saint Francis University to ensure that it would continue to be used to educate future generations regarding the legacy of the war. His once private collection, combined with additional donations, is now available for public viewing.

Timeline Room
This room provides an illustrated chronology of major events of World War II, from the attack on Pearl Harbor in 1941 through the surrender of Germany and Japan in 1945.

The June 6, 1944 Room
The museum’s flagship exhibition commemorates the valor of local soldiers who, while serving as U.S. Army Rangers, participated in the capture of long-range German defensive artillery at Pointe du Hoc in Normandy, France, on D-Day.

Currently houses new displays of U.S. Army and Navy uniforms of World War II from the Keirn collection.  Several of them are on display for the first time, and some were worn by local veterans of World War II.

Houses a major interpretive exhibition titled, “National Identify and Military Culture, an examination of how a country’s history shapes it sense of national identity and the military culture of its armed forces.

The exhibit includes extensive artifacts from the Keirn collection and includes American and German examples. The East Exhibition Room also features a tribute to the United States Marine Corps, and a tribute to three selected American heroes of World War II – “three ”among many.”

Special Collections
Several individuals, including Vincent Hagg ’50, and the family of Renato Ferretti ’43, have donated artifacts, papers, and personal items Please visit the museum to hear more about these and other collections as well as the donors’ wall of honor.

As a part of Saint Francis University, education and interaction are central to our mission. Local schools, veterans’ groups, and community organizations are welcome for personalized tours.  Please contact the museum in advance to make arrangements for your group visit.

Legacy Donation
Give a gift in honor of or in memory of a friend or family member. You can also give donations as retirement, graduation, birthday, anniversary, or in recognition of military service gifts. The name of the person honored or memorialized will be displayed on our website.

General Donation
You can also make a one-time donation to support the preservation of artifacts and continued student research in our collections.