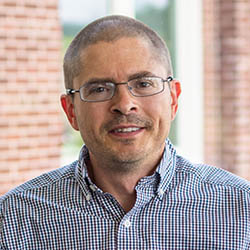 Dr. Remillard teaches the university's introductory course on the life and legacy of Saint Francis of Assisi called Franciscan Goals for Today. He also teaches courses on religion and sports, interfaith literacy, health care ethics, post-apocalyptic literature, and American religious history. In addition to his teaching responsibilities, he is the director of the Wolf-Kuhn Ethics Institute and the associate director of the Honors Program.

His research interests include religion and sports, religion in the American South, American sacred space, U.S. Catholic History, and civil religion. His first book, Southern Civil Religions, investigates the competing and complicated value systems of the American South during the post-Reconstruction era (c 1877-1920). He is co-editor with Rebecca Alpert of Temple of Gods, Games, and Globalization and is presently writing a religious history of sports in the United States.

Dr. Remillard has also written essays for popular outlets including the Washington Post, Christian Century, and Sojourners.  His article, "Steelers Nation and the Seriously Religious Side of Football" remains one of his most read essays.

When he's not teaching or writing, Dr. Remillard enjoys spending time with his family and distance running. He also maintains a blog at his website, https://www.arthurremillard.com/.